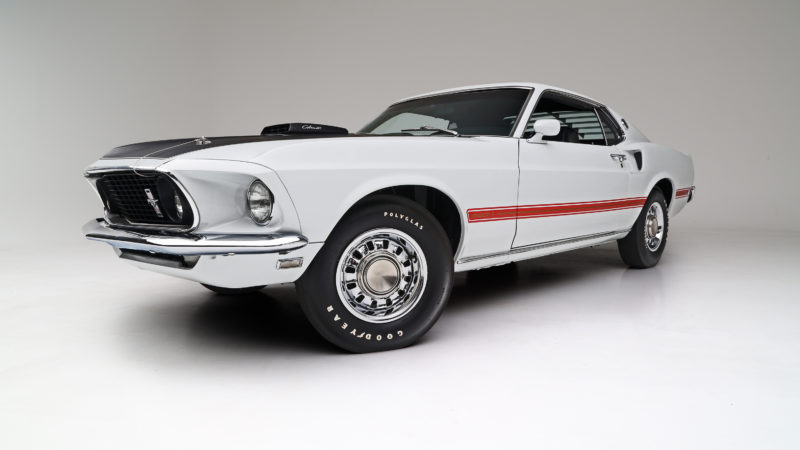 “The Mach 1 comes on like no other Mustang ever produced, including the Shelby GT. It’s just out of sight.” —Cars magazine (1969)

Ford brought a new style of Mustang to market in 1969. It was called the Mach 1. Named after military jet pilots’ term for the speed of sound, the Mustang Mach 1 put a whole new spin on the pony-car revolution. With its sports roof styling, big-block engine, and bulletproof rear, the Mach 1 was a serious street machine for the hey-day of the muscle car era.

Now it’s your turn to add some nostalgic excitement to your life when you bring home an extremely low mile, fully restored Ford Mustang Mach 1 in the new Mustang Dream Giveaway.

This factory-special-ordered Ford Mustang Mach 1 is a muscle car on a mission. Powered by Ford’s legendary 428ci Super Cobra Jet engine, backed by a brawny three-speed automatic transmission, and transferring power through a W-code Traction-Lok rear with 4.30 gears, this very special Mach 1 has only racked up 49,000 miles on its odometer in the last 50 years. That’s less than 1,000 miles a year.

If you’ve ever dreamt of setting the dial on your wayback machine to 1969 just so you could drive a new Ford Mustang Mach 1, then we have great news for you. Even if you missed out on your chance to score a new Mustang from a Ford dealer 50 years ago, Dream Giveaway will give you, if you’re the winner, the keys to this very rare low-mile and fully restored 1969 Ford Mustang Mach 1 factory drag racer.

Enter with your generous donation to help veterans and kids’ charities and you’ll be well on your way to putting this extremely low mile, fully restored and rare 1969 Ford Mustang Mach 1 in your garage.

Whether you like populating your backseat with first-place trophies at car shows, want a special ride for a Saturday night one-on-one or just like the bragging rights of classic iron in your garage, this extremely rare example of classic Mustang performance will keep you smiling day in and day out.

This 1969 Ford Mustang Mach 1 factory drag racer was special ordered 50 years ago as a high-performance method to get from point A to point B and has 49,000 miles on its odometer. It underwent a fantastic frame-off restoration before arriving at the Dream Giveaway Garage.

When you enter to win with your generous donation to help veterans and kids, we’ll set aside $10,000 in cash to pay the IRS on your behalf if you’re the winner.

The Mach 1 was a legendary performance-oriented model of the Mustang lineup. Traditional fastback styling was combined with a powerful V-8 engine, a special suspension system and a unique interior package to distinguish this model as a true performance car.

Are You Ready to “Mach” and Roll?