Having owned a 1999 Corvette convertible as a weekend toy, I nearly sold it after about 4 years, figuring it was not getting used enough to justify the investment. That’s when I discovered and tried autocross. That changed everything. After 2 years of autocross in a 1999 Corvette Convertible I decided a fixed roof corvette that would be safer and better to try on a track. I changed the 99 for a stock 04 Z06. I had previously installed upgraded suspension parts on the 99 and transferred them to the 04 Z06. This included QA1 adjustable shocks, HyperCoil Springs, and VanSteel adjustable sway bars. That and some fat BFG Rival S tires on Forgestar rims and for the first time ever started seeing the top end of the local autocross results.

During mid 2016 season Jeff Dunnavant convinced me to try the NCM USCA event. This, a first ever time on track, resulted in 3rd place overall for the GTL category and that was that, I was hooked, and started planning to improve the car where it needed some. The track was an eye opener at the USCA competition, while I was up everyone’s tail on the corners, having a good stock Z06 and knowing the car well from autocross, the high horsepower cars would leave me in the dust on the straights. I was also amazed that a top competitor, in Danny Popp, not only gave me time of day for questions, but also helped me pick parts for the upgrade and consulted when I had installation questions.

So, several weeks after the 2016 NCM USCA event the car went on the lift at home and the conversion began. Out came the 42kmile LS6 and in its place a GM Performance LS3 525hp engine was the right budget fit for me. A target of around $12-15K for the completed works and here is how it got spent:

The budget was overshot a little, but selling some old parts helped a lot. It took a month to convert the car but took longer to get the engine cooling and tuning stable and get the suspension set up where I felt I had a manageable car. So most of the remainder of 2016 was dedicated to just that. Other components on the car include:

In April this year (2017) was my second USCA event at NOLA. What a wonderful track. Plenty runoff, and I needed it!! Nonetheless, some mistakes that I hope don't show up on a video, and leaving a little time on the autocross section, a 4th overall in GTL, having learning a ton more about track driving and figured out some better tactics for Speed Stop.

A plan exists going forward regarding suspension/body setup/brakes to improve things. But, patience is needed, as the funds are exhausted for the short term, sigh…!

The best part of this journey is all the great people you meet and how helpfull everyone is along the way. I try to share my knowledge equally with anyone who asks. Thats what makes this sport and network special. This project has been special, learning a ton about the corvette and also now taking on the engine tuning; not an expert, but hey, there are great tools out there, and its fun and satisfying. 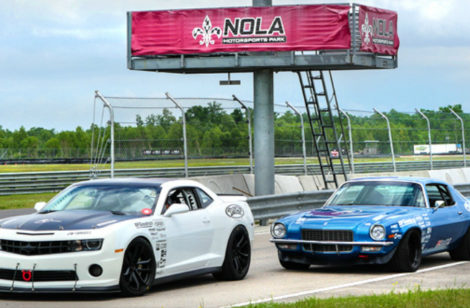