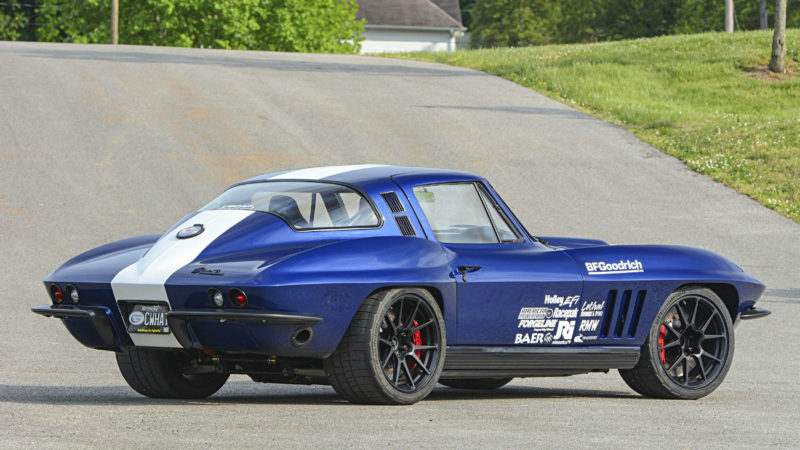 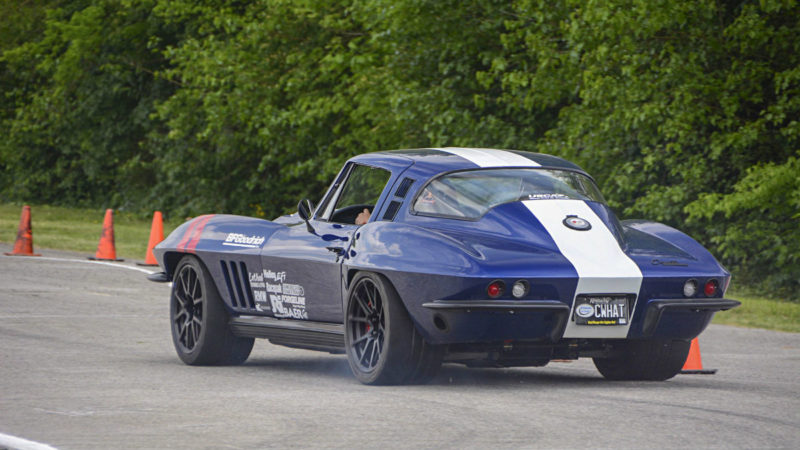 The SRIII Motorsports chassis features a round-tube design and complete C7 suspension with Hyperco front and rear springs and JRi shocks on all four corners. A Flaming River rack and pinion simplifies the steering system and gives the car excellent steering response. Braking is handled by Baer Brakes discs, with massive slotted rotors and billet 6S calipers. Rolling stock consists of Foregline GS1R wheels, which measure 18x11 inches up front and 18x12 inches out back. Gerald and Joe decided to stay with the stock shape of the wheel openings, rather than going with the more rounded flares that were seen on Grand Sport racecars of yesteryear. From a distance the car’s body appears stock, but as you get closer, you notice the extra curves in the front fenders and rear quarter panels, allowing just enough room for the huge BFGoodrich Rival S tires, sized at 315/30R18 up front and 335/30R18 out back.

Under the hood is another modern Corvette element, an LS7 engine. The aluminum block retains the stock bore and stroke, which keeps it at 427 cubic inches. The short block has been converted to a wet sump oiling system, and the original LS7 cylinder heads were rebuilt with new valves, springs and guides. Lewis Roberts at Roberts Motor Vehicles in London, Kentucky handled the engine work, installing a Brian Tooley Racing (BTR) camshaft and associated valve train components. Up top is an MSD Atomic Airforce intake manifold, which brings in air from a Spectre cone filter and carbon fiber intake pipe. Holley EFI controls the fuel system, as well as the ignition, which consists of MSD coil packs and plug wires. Exhaust gasses exit through a set of American Racing stainless steel headers, which lead to a three-inch exhaust system and Magnaflow mufflers. Lethal Performance tuned the LS7, giving it 567 horsepower and 535 lb-ft of torque.

Behind the 427ci power plant is an American Powertrain prepared T-56 six-speed manual transmission. It is designed to fit the Corvette chassis and provide optimal shifter placement, compared to a T-56 with a stock case and tail housing. A GM F-body bell housing was used to connect the engine to the transmission, and a McLeod RST clutch takes the heat when those BFG’s are hooked up. The shifter is a custom piece from Finch Performance. Moving further back is an American Powertrain driveshaft, which leads to a C7-style rear end, prepared by Currie Enterprises. The center section features a 3.42:1 gear ratio, while strong Drive Shaft Shop axles send power to the wheels.

During the car’s brief restoration, a four-point roll bar was fabricated and installed by Finch Performance. This offers safety and rigidity in the rear section of the chassis, while also providing a mounting point for the RCI five-point harnesses. Gerald and Joe made quite a few changes to the interior, including the incredible Tillett carbon fiber racing seats. The diamond stitching and exposed carbon fiber offer excellent style and comfort for this classic Corvette. The dash got a fresh leather wrap, while the original radio, clock and heater controls were replaced with smooth panels to house the Holley EFI touch screen. You’ll also notice a lack of analog gauges, as the Gregory’s smoothed the gauge panel with a sheet of carbon fiber and installed a Race Pak Street Dash system to monitor the engine’s vital signs. A Vintage Air kit controls the interior climate, while an American Autowire harness gets juice from an Optima red top battery and ties all of the technology together. Joe handles most of the driving, and used a Flaming River steering column to position the Momo racing steering wheel to his liking.

And while this 1964 Corvette might be a few notches above the average father and son project car, it’s an awesome example of a modernized classic that gets used and abused on a regular basis. They built it to run on autocross courses, and travel the country with NSRA, Goodguys, Optima Ultimate Street Car Challenge and more to put their creation through the wringer. So far, the result is a long list of victories and top 5 finishes against the quickest cars in the nation. Gerald and Joe couldn’t be happier with their project car, which turned out to be quite the performer after about six months of work and a huge collection of go-fast parts. From its days of slumber to burning up the autocross course, this 1964 Corvette coupe went through a big transformation, and this father and son team will continue to thrash on it for years to come. Vette 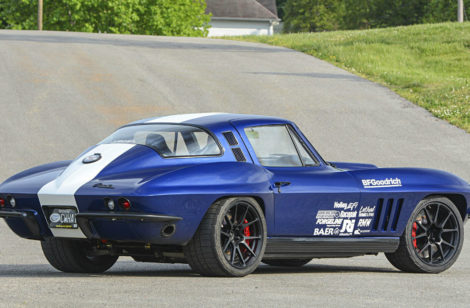