Here in our little cocoon of coolness at TEN you would think magic elves show up at night to build our project cars, but that’s not really the case. Just like you, we have to put in the hours if we want our cars ever to see the light of day, much less the pavement. A case in point is the 1963 Chevy II Super Chevy project car owned by our Tech Center Manager Jason Scudellari. He inherited the project from another TEN employee, but the catch was that it was in pretty bad shape. It had more rot and rust than we’re used to seeing here in hot and dry Southern California, but Jason was up for the challenge.

The plan was to end up with a badass Pro Touring ride, a challenge when dealing with the factory underpinnings, so those were tossed in favor of a complete chassis from Schwartz Performance. The beauty of this chassis was that it would slide under the Chevy with little fuss and take the ride into a whole other realm of handling. While the chassis was getting stitched together and fitted with Baer brakes (including a full floater kit), Moser rear, QA1 shocks, and other widgets, the body was shipped off to Superstition Restorations in Mesa, Arizona, for some fresh sheetmetal from Golden Star Classic Auto Parts and a set of Detroit Speed mini-tubs. The body mods were kept to a minimum, but the driprails were shaved along with the gas fill location in the quarter. We also ditched the factory core support for a slick aluminum piece from Stoker’s Hot Rod Factory.

With the body and chassis being addressed it was time to think about motivating the Chevy down the road. What Jason opted for was a Chevrolet Performance LSX376-B8 boost-ready LS long-block mated to a ProCharger P-1SC centrifugal supercharger. We also added a wilder Comp cam, a FAST intake and fuel system, ARP head studs, and a baffled Holley LS swap oil pan to the mix. The combo made 877 hp on the Westech dyno, which is way more than we need, but that’s the beauty of boost. Backing up the LS will be a six-speed Magnum XL from American Powertrain mated to a McLeod clutch and a Quick Time bellhousing. The engine will be controlled by a Holley Dominator computer, which will feed data to one of their digital dashes.

The Chevy will roll on custom American Legend wheels wrapped in Falken rubber. Speaking of wrapped, instead of paint Jason is going to have the car vinyl wrapped by SoCal Wraps. It’s a ton cheaper than paint and he won’t have to worry about rock chips and cone rash while the Chevy is getting sorted out at the track. Artist Micheal Castiglione did a rendering for us and we think the end result is going to be killer. Look for more stories on this slick ’63 at superchevy.com and in the pages of Super Chevymagazine. 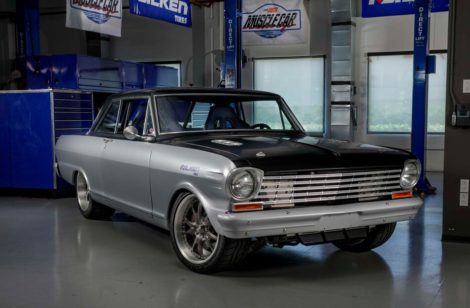