Gordon Minty was diagnosed with Parkinson’s disease in 2011.  Since then he and his family have had to say goodbye to the good old days of cruising around town with the windows down singing some BB King.  Singing and dancing with is baby girl is a favorite pastime of Gordon’s.  As time has moved forward, Keri Connor has slowly watched Parkinson’s steal her dad’s twinkle in his eye.  There is still one twinkle left for Gordon thought, it’s the twinkle when the two of them chat about his 1949 Chevy truck.  Keri just new, she wanted to keep Gordon’s truck twinkle as long as possible.

Rebuilding her dad’s 49 for him became her top focus.  Steve and Keri Connor are no strangers to restoring hotrods.  Together, they had Lyon McClenahan of Finish Line Speed Shop rebuild their 1967 Dodge Dart.  They knew that with this build, Lyon and his team brought endless capabilities to the table for both the sheet metal restoration and custom fabrication required to take on a job of this magnitude.

When Steve and Keri met with Lyon to go over preliminary plans for Gordon’s truck, Lyon’s wife, Jennifer, immediately knew what to do next.  Once again, Jennifer took back her annual phase of “We are taking a break from SEMA this year”.  Instead, she made the decision that raising awareness regarding the need for a CURE for Parkinson’s should become Finish Line Speed Shop’s next #ProjectGivigBack.  This will be Giving Back’s fifth year showcasing Hot Rod’s for a cause at the SEMA Show.  Gordon Minty’s truck is the perfect truck to help with this year’s #PunchOutParkinsons CAUSE.  Gordon’s 1949 Chevy Truck will be showcased in AIR LIFT PERFORMANCE’S booth #23733 during the 2019 SEMA Show.  It, along with Project Giving Back’s 1978 C-10 Cancer Awareness build will then make their way over to the Dino’s Git Down Truck Show in Glendale, Arizona.

Lyon and the rest of the Finish Line Team thrive off the challenge of taking a truck to the next level.  This 49 was definitely going to be one of his most challenging to date.  Keeping as much as possible of Gordon’s original vintage parts will be crucial.  With that knowledge in mind, Finish Line Speed Shop set out to ensure that this is one truck that will help Gordon carry that 49 Chevy twinkle he still has. 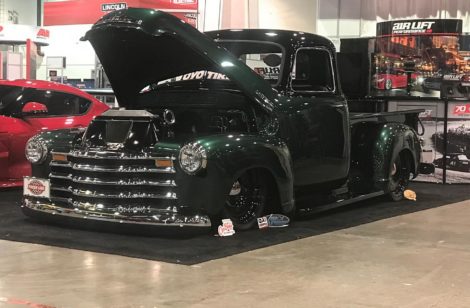